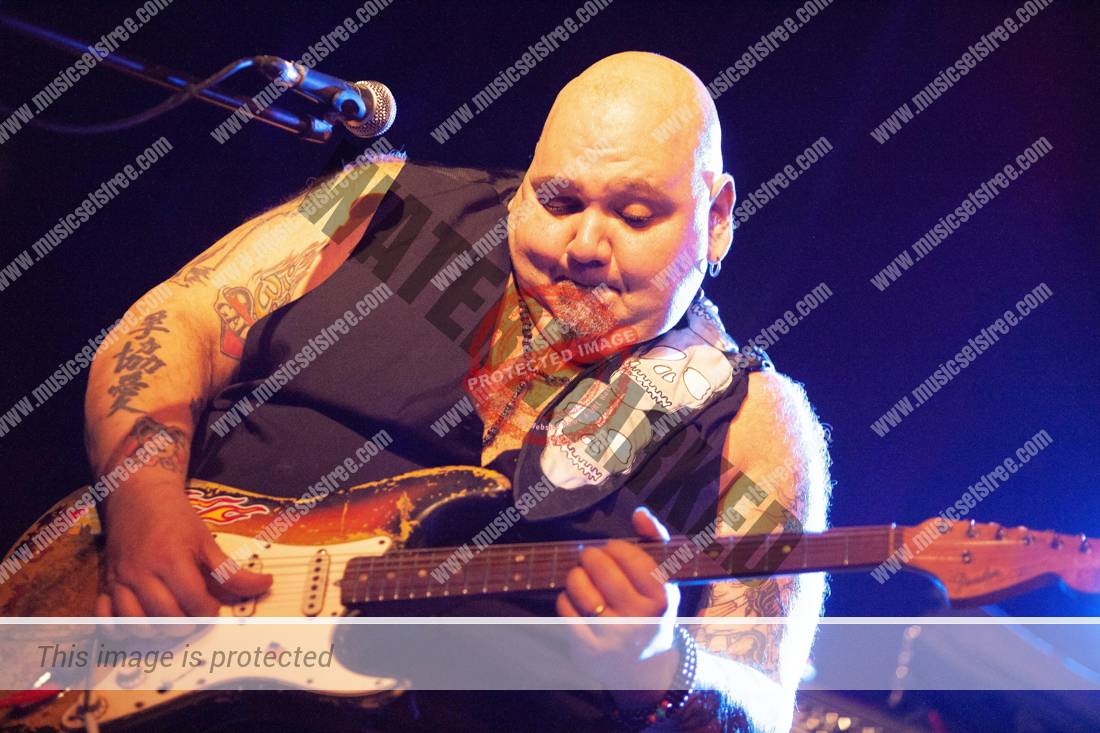 Theodore Joseph “Ted” Horowitz (born March 31, 1960 in The Bronx, New York City, United States), who plays under the stage name of Popa Chubby (a play on the slang idiom “pop a chubby”, meaning to get an erection), is an American Rock / Electric blues singer, composer, and guitarist.

At age thirteen Horowitz began playing drums; shortly thereafter, he began listening to the music of the Rolling Stones and started playing guitar. Although he grew up in the 1970s, Horowitz was influenced by artists of the 1960s, including Jimi Hendrix and Cream, among others. In his early twenties, although he mainly played blues music, he also worked as backing for punk rock poet Richard Hell. Horowitz first came to public attention after winning a national blues talent search sponsored by KLON, a public radio station in Long Beach, California, which is now known as KKJZ. He won the New Artist of the Year award and as a result was chosen as the opening act at the Long Beach Blues Festival in 1992. Horowitz played more than 200 club dates a year through the 1990s.

In 1994, Horowitz released several albums on his own Laughing Bear label, including It’s Chubby Time and Gas Money, before he obtained a recording contract with Sony Music/Okeh Records. Booty and the Beast, his first major-label album, produced by Atlantic Recordsengineer/producer Tom Dowd, who worked on recordings for artists such as Aretha Franklin, Ray Charles, and Wilson Pickett, was released in 1995. In 1996, a live recording of Horowitz’s was released, Hit the High Hard One. Two years later, One Million Broken Guitars was released on Lightyear Records; Brooklyn Basement Blues followed in 1999.

In 2000, Horowitz signed with the Blind Pig label and released How’d a White Boy Get the Blues? in 2001. The disc turned out to be a slight departure from Horowitz’s usual musical direction, incorporating elements of contemporary pop and hip-hop. The Good, the Bad and the Chubby, released in 2002, was an example of the development of Horowitz’s songwriting skills and included the 9/11 commentary “Somebody Let the Devil Out.” Blind Pig released a collection of early Horowitz recordings, The Hungry Years, in 2003. A year later, Horowitz released Peace, Love and Respect.

Two albums previously available only in France – Live at FIP and Wild – were compiled by the Blind Pig label and released as Big Man, Big Guitar in 2005, followed by Stealing the Devil’s Guitar a year later. The Fight Is On, was Horowitz’s first studio album after a two-year hiatus. It was released in February 2010 on the Provogue label in Europe, and Blind Pig in North America. A world tour followed.

In 2008, Horowitz and his ex-wife Galea, recorded Vicious Country, which was released on the Dixiefrog label. Vicious Country was chosen as ‘Record of the Week’ by the French Canal+television station in March 2009.

In 2015 He released Big Bad and Beautiful a two disc live CD recorded in France with Dave Keyes on Keyboards and Francesco and Andrea Beccaro Bass and Drums. In 2016 He released The Catfish on French Verychords Label and on PCP Productions in North America. This record yielded both the 3D animated video of the title track by Laurent Mercier of Callicore. And the iconic tribute “Blues For Charlie”

In 2017 he released Two Dogs again on Verychords for Europe and PCP North America.