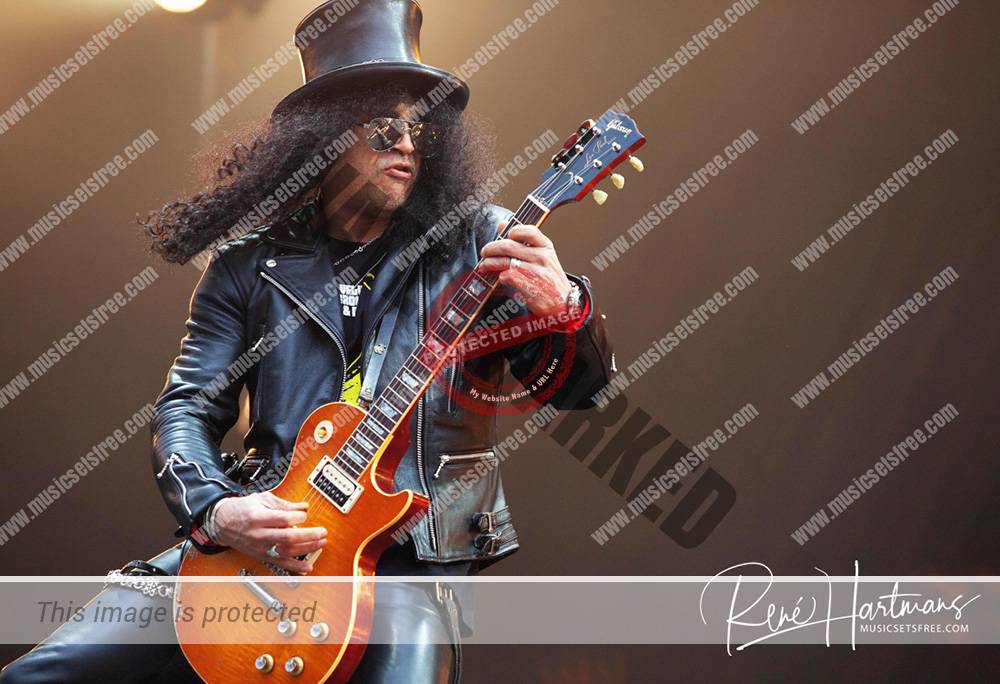 Slash was born Saul Hudson in London, England, in 1965. He grew up in Los Angeles and learned to play guitar as a teenager. In 1985 he joined Guns N’ Roses and earned international acclaim for riffs on songs like “Sweet Child o’ Mine.” After leaving GNR in 1996, Slash did session work and formed other bands, such as Velvet Revolver. Slash suffered heart failure in 2001 and reformed his life, documenting it all in his 2007 autobiography. In March 2016 it was announced that Guns N’ Roses would reunite for a North American tour.

Saul Hudson, better known as Slash, was born to an African American mother and British father in London on July 23, 1965. A family friend gave him the nickname “Slash,” because he was constantly in motion.

Slash lived with his father and grandparents in Stoke-on-Trent until the age of five, when he and his father joined his mother in Los Angeles. His parents divorced several years later, and Slash became a “problem child.” He lost interest in schoolwork and took up BMX racing. At 14, he began learning to play guitar, sometimes practicing for as many as 12 hours a day. In 1981, he joined his first band, Tidus Sloan, and dropped out of high school to tour.

For the next four years, Slash joined or formed a series of bands. Among them was Hollywood Rose, which also included Axl Rose and Izzy Stradlin. The band didn’t last, but in 1985 Rose and Stradlin asked Slash to join their new band, Guns N’ Roses. They began writing the songs that they would become known for, including “Sweet Child o’ Mine,” “Welcome to the Jungle” and “Paradise City,” and were signed by Geffen Records in 1986.

By the time Guns N’ Roses released their debut album, Appetite for Destruction, in 1987, Slash and other members of the band had developed a drug problem. Two years later, when the band opened for the Rolling Stones, Axl Rose made a very public announcement that he would leave the band if the other members kept using heroin.

In 1991, the band embarked on the two-and-a-half-year Use Your Illusion tour and released the albums Use Your Illusion I and Use Your Illusion II. The albums debuted at No. 2 and No. 1, respectively, on the Billboard 200 list, but the group was losing steam. Izzy Stradlin left the group suddenly, and their next album, a compilation of punk and glam-rock covers titled The Spaghetti Incident, performed poorly compared to their earlier work. Slash’s final show with the band was on July 17, 1993, and after a period of dormancy, he announced in 1996 that he was no longer a member of the band. Although he was widely rumored to have left the band because of artistic conflicts with Axl Rose, Slash’s 2007 autobiography claims that he quit Guns N’ Roses because Izzy Stradlin and Steven Adler left, because Rose required band members to sign contracts that made them “hired hands” and because Rose made the band take the stage hours later than planned during tours.

Twenty years after Slash’s departure from the band, in March 2016, it was announced that GNR would be reuniting for a 21-city North American tour, with shows in Las Vegas, at Coachella and in Mexico City scheduled as a lead up to the highly anticipated event.

After he finished touring with Guns N’ Roses, Slash formed a series of bands, including Slash’s Snakepit and a blues cover band called Slash’s Blues Ball. In 2003, he formed Velvet Revolver, which was largely praised and heralded as a successful comeback. Slash also released two solo albums, one in 2008 and one in 2012.

Slash married model-actress Renée Suran in 1992 and divorced from her in 1997. In 2001, he married Perla Ferrar, and they had two children. Although he filed for divorce in 2010, the couple reconciled two months later.

At the age of 35, Slash was diagnosed with cardiomyopathy, caused by years of drug and alcohol use. He was given just weeks to live, but he had a defibrillator implanted and, beating the odds, went on to survive. He has been sober since 2006, and in 2007 he published his autobiography, titled simply Slash.