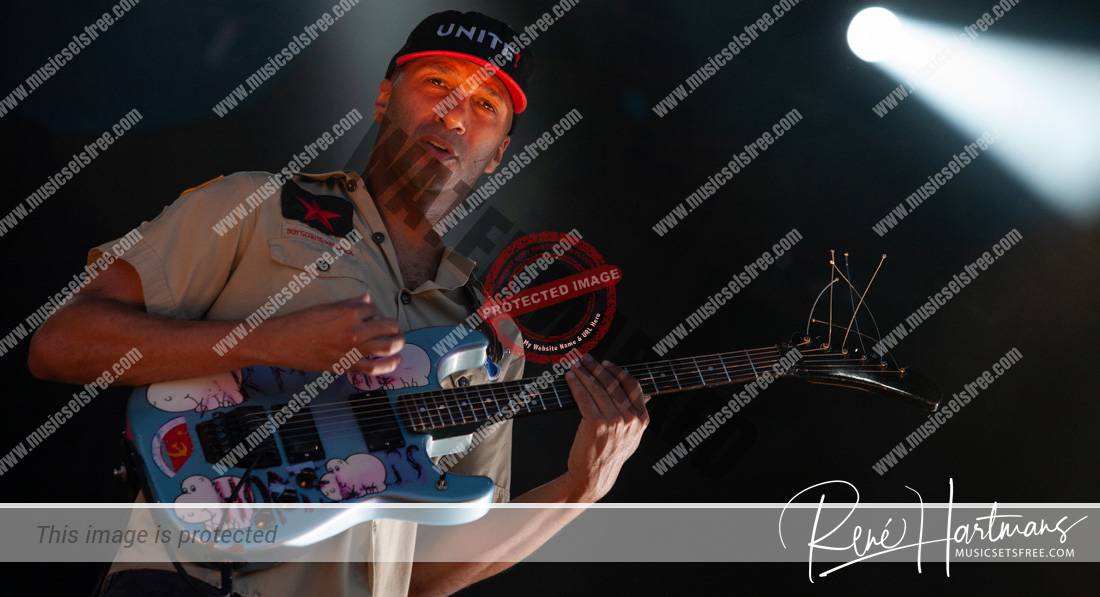 Tom bought this guitar after moving to LA in 1986 at a store in Hollywood called “Performance Guitar”. It was completely custom-built – meaning that Tom chose every single piece of it himself, even though at the time he didn’t know much about guitars – or at least none of the things related to building one. The result wasn’t what he hoped for, and over next two years he completely modified it to fit his needs, leaving only the body original.

In it’s original state, the guitar featured a light-blue colored rear loaded Stratocaster-style body and a Performance Corsair neck, two Seymour Duncan JB humbuckers, and the original Floyd Rose chrome unit. Tom changed the neck couple of times, and eventually settled for a graphite Kramer-style neck which he found in a bin at a place called “Nadine’s Music”. He also swapped the tremolo bridge more than a few times, going over all of the versions of Kahler and Floyd Rose models, but eventually fitting the guitar with the Ibanez Edge double locking tremolo. He also removed the original pickups and installed the EMG 85/EMG H set.

The guitar is decorated with couple of drawings of a hypo done by Tom himself (it is supposedly the only he could draw, and he only knew how to draw them facing the left side). Around 1993 he carved the words saying “Arm the Homeless” which quickly became the guitar’s nickname due to lack of actual branding.

Tom used this guitar as his main during the RATM era for the standard tuned songs, and retired it around 2002 as he started playing with Audioslave. He took it out of retirement as soon as 2005 during the writing of ‘Out of Exile’ album, and since then it has been used regularly like before. When RATM reunited in 2007 it was back as his main guitar, and remained as such to this day.